A Little Something Different - A Week in the life of Mr. Redmond

With all credit to the incredible artist, Kamitora, whose painfully hot pictures inspired this story!

Mr. Felix Redmond has made his career in the field of domestic service.  Unlike a butler, valet or footman, he has a very specific purpose that takes him from house to house.  Mr. Redmond serves six households.  He spends one day each week with each family, taking Sunday as a day of rest from all his hard work.

To understand Mr. Redmond’s job, it may be easiest to examine a few specific days in an average week.  Let us begin by looking at what Monday holds in store for Mr. Redmond.

On Mondays, our domestic gentlemen spends his day at the home of the Duke of Kent.  His most prestigious employer, the Duke is an older gentleman who is kept busy with his responsibilities at the House of Lords, managing his estates and leading the local hunt.

With all his obligations, the Duke often doesn’t have time to take care of matters at home.  Specifically, the needs of his younger wife, Millie.  The Duchess is a headstrong lady, raised in a more lax environment than the aristocracy demands.  Her father spoiled her with too may freedoms as a young girl and she tends to be undisciplined.  Correcting her is important, but would take too much of the Duke’s precious time.

That, of course, is where Mr. Redmond comes in.  The Duke and his household servants make a list of the Duchess’ misdeeds throughout the week and hand it off to Mr. Redmond when he arrives Monday morning.

Throughout the day, Mr. Redmond works hard to correct the Duchess and instill the discipline she needs as a member of one of the highest families.

As the Duke is a very traditional man, much of her chastisement is on her plump buttocks.  Mr. Redmond carries a large bag, much like the fabled Mary Poppins, that contains all sorts of instruments for heating up a lady’s naughty posterior.  Mr. Redmond also carries a precise mental list of how Millie reacts to each and every implement.  Thus he knows that a stern encounter with a Spencer Paddle imported from the Sates will cause her to erupt in a flood of tears.  He always paddles her until her wails can be heard throughout the grand house at least once during the course of the day. 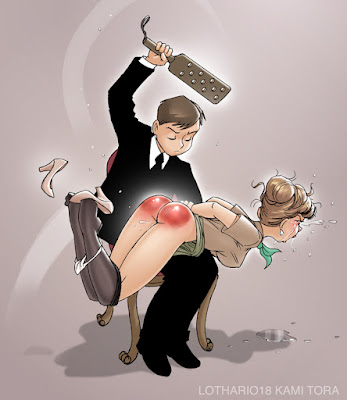 Of course, a lady’s buttocks cannot withstand a full day’s worth of continuous discipline.  Mr. Redmond has many other tricks up his immaculate sleeves.  To give an example of some of his other methods, we can turn our attention to the household he visits on Wednesdays.

Though far less traditional, Admiral Laura Keene’s house is just as strict as the Dukes and also just as busy.  The Admiral is often called away from home and away from her lovely wife, Gemma.  Gemma, in another parallel with the Duke’s household, was raised without much discipline.  Gemma’s case, however is more extreme.  Not gentry at all, she was raised in a rough portion of Liverpool.  Her harsh upbringing led her to a defiant attitude towards authority.  Though she loves her wife, Gemma often has trouble obeying as she ought.

On Wednesdays, the Admiral always meets with Mr. Redmond, either in person or in an online chat.  She informs him of her wife’s behavior though the previous week and he takes care of the infractions.  The Admiral never quite has he heart to be properly stern with her pretty wife, but Mr. Redmond can be relied upon.  He knows that a leather suit makes her feel like the rebellious teen she was, and that punishing her in it will make the point that no amount of armor, mental or physical, can withstand good discipline.

Gemma particularly hates to have her inner recesses invaded, especially her back door.  Thus Mr. Redmond is always sure to insist that a clean conscience is achieved through a clean rectum.  A large, inflatable nozzle always rests on the sink in Gemma’s bathroom, next to a very official enema apparatus.  Around lunchtime, halfway through whatever other punishments have been determined for that week, Mr. Redmond hooks up the tubing and fills Gemma’s naughty ass with a full gallon of water and castile soap.  She is expected to hold the enema for a full 8 minutes while Mr. Redmond details all the ways in which she was a naughty girl in the most demeaning of language.  Gemma is always in tears by the time he allows her to expel the solution.  Her buttocks are then heated for a few minutes over Mr. Redmond’s lap before a second, warm water enema rinses her out. 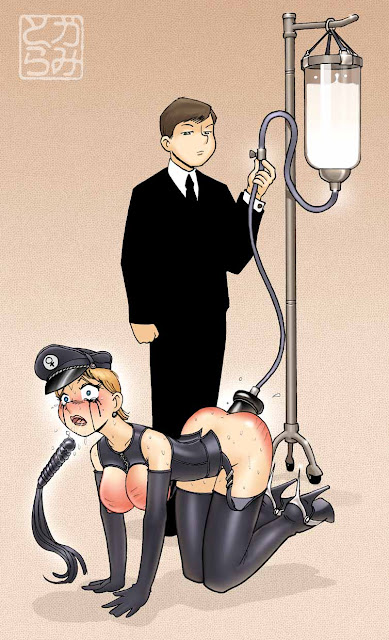 Let us leave Gemma to her humiliation, and move on to the household that Mr. Redmond spends his Thursdays in.  The Spencers are ‘nouveau riche’, in the terms of the snobbier of the London circles.  Mr. Jake Spencer made his fortune in the infamous “Spencer App” that allows young people to search the latest food trends in an area.  He himself grew up in a cola mining ton in northern England and worked hard for everything he got.  Mrs. Emily Spencer, however, married him after his first million.  Emily is the daughter of a diplomat and came to Mr. Spencer’s attention at a charity reception.  They married within a year.

Unfortunately, the couple were ill-suited at first.  Emily was accustomed to a life of ease and, it may be honestly stated, was somewhat spoiled and snobbish.  The first time she accused her husband of ill-breeding he contacted Mr. Redmond.

Now Mr. Redmond comes by the Spencer home every Thursday to help Emily learn her place.  One of the most effective methods is involving her in domestic chores.  Thursdays are a holiday from cleaning for the servants.  Instead, Emily is forced to do the demeaning tasks of keeping her how  household tidy.

Unlike the Duchess and Admiral, Mr. Spencer has more time to himself.  His need for Mr. Redmond’s services revolves around the creativity Mr. Redmond brings to the job and a desire to watch his wife’s degradation.  This Thursday, for instance, he reclines on a comfy chair in the entrance hall with a drink in one hand.

Today the floors need mopping.  Mr. Redmond has created an ingenious tool for Mrs. Spencer to use.  She must kneel on the marble floors, using her double D breasts as scrubbers.  Soap in her mouth reminds her to keep her comments about the lower classes to herself, while a whip across the buttocks encourages her to do a good job.  Mr. Spencer watches the show happily.  Tonight, when Mr. Redmond has returned home, Emily will face an enthusiastic fucking from her husband. 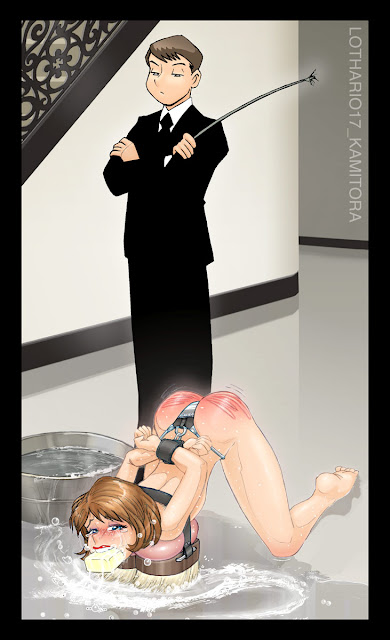 Although Sundays are to be a days of rest for Mr. Redmond, he generally toiles on them as well.  After a long week of her husband being away each day correcting other wives, Mrs. Redmond needs some attention herself.  Mrs. Redmond, Margie, relies on her husband’s excellent salary and does not need to work herself.  Instead, she takes care of their two children, organizes the household and keeps things running while Mr. Redmond ‘brings home the bacon’ as it’s said.

The trouble is that Margie is a lovely, but inherently lazy woman.  She loves her husband and children, but she doesn’t love the work of a housewife.  Some days she skips out on her duties to shop with her friends.  More often, she spends hours playing video games while the housework goes undone.  She knows better, but she just can’t help herself.

Fortunately for Mrs. Redmond, she is married to a man who’s entire career revolves around motivation. 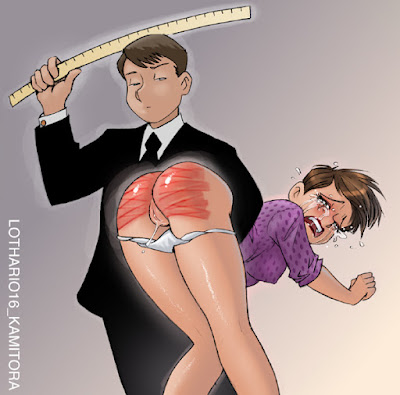 Every Sunday before church, Mr. Redmond calls his wife downstairs and bends her over in the front hall.  A sturdy oak ruler lives in the umbrella stand for just this moment.  While their children watch cartoons, Mr. Redmond gives his wife’s bottom a thorough going over.  He spanks her for a full five minutes until her backside is a tapestry of overlapping ruler marks.  Margie will have to sit on her welted bottom through the Sunday service, squirming and wondering what other punishments he will dole out.  Home is a good place for experimentation after all, and Mr. Redmond needs to be up on all the latest techniques.

Popular posts from this blog

June 29, 2021
“That should do as a warmup.    I want this puss nice and hot and sensitive.”    He ran one finger over her bright red cleft.    “It has a lot of punishment yet to go.” Their next destination, confusingly, was the garage.   Roger led her to a foot ladder and instructed her to bend over it.   As she did, he pulled out stout lengths of garden twine and tied her by her wrists and ankles to the legs of the ladder.    He gave it an experimental rock, but it stood steady.   Now Nancy’s pussy was the highest point of her body.   Her head hung low, and she could see Roger’s legs from between her own. He moved away, then returned carrying something.   “I noticed the new clothespins you were using the other day.   Very clever little things, much better than the old kind.   It gave me an idea.”   Slowly and gently, Roger pulled one lip of her pussy outward.   He took a clip in one hand and placed it to one side over her lip.   Then he let go. Nancy yelped in alarm.   The pin felt almost lik
Post a Comment
Read more

July 27, 2021
The first time Nancy met the dreaded brush, it was a cold December evening.   She’d been playing bridge with the girls and come home a little late.   Roger gave her a warning, but dinner was on time and the evening looked to be pleasant.   Nancy had done the laundry that morning, so she went to fold clothes before Leave it to Beaver came on. Now Nancy was perfectly aware of what things could and could not be put in the dryer.   So, when she pulled Roger’s best woolen pants out with the rest of the clothes, she couldn’t quite believe what she was seeing.   She held them up – they were small enough now to fit a child. Nancy groaned in dismay. To her further bad luck, Roger was nearby, getting a bottle of coke in the kitchen.   “Nancy?   What’s the matter?” For a wild second, Nancy thought about lying.   But Roger’s terrible punishment when he’d caught her telling fibs flew through her mind, and she knew that the spanking she’d get now would be far more merciful than what might ha
Post a Comment
Read more

June 24, 2021
After her honeymoon, Nancy’s married life settled into a pleasant domesticity.   She and Roger moved into their home in the outskirts of Dayton, Ohio.   Roger had found the house plans after their engagement and had the house built just for them.   He was a manager at a major store chain and while they were not rich, they were very comfortable.   Nancy loved her new home and threw herself into the role of housewife: picking out soft furnishings, keeping everything bright and clean and learning to cook more dishes.   In truth, Nancy had never been a particularly diligent cook.   She much preferred making clothes or playing with babies in home economics.   While she had the basic roster of simple meals under her belt, that was about all she had.   She also hadn’t drunk much, so there was a little learning curve as she got the way Roger liked his drinks down.   And learning curves, she had come to know, involved learning by way
Post a Comment
Read more

A Proud Member of...